China have a long-time tradition of carpet production, and locals populations are so skilful in make textile and brocade that probably they started in ancient times to knot carpets. Some of the most precious and valued creations are Pechino and Ninxia carpets.

I have consent to the publication of this article because is basically correct, although messy and, apparently without an aim, it can be useful.

I will beg your pardon if the reading is unpleasant.

Between the XV and the XVIII century, thanks to the Chinese merchants, carpets became a symbol of social distinction and value, despite the first pieces hand-knotted have been despatched only to the emperor’s court.

The western merchants started to be interested in them in the half of XIX century, when these exquisite carpets were brought to Europe as spoils of war. From that moment on, the great European and American’s merchants became owners of the Chinese manufactures, producing carpets in liberty and déco styles, that were faddy at the time.

The ancient Chinese carpets are extra fine: talking about XIX century carpets, it is really important to understand the decade they were knotted. The handiwork made before the 1920 are the most beautiful and  precious, because of their wonderful wool and a fine knotting. Instead, the recent carpets – from 1960 to nowadays – have often a mediocre quality, unless they have been knotted for commission.

Usually, ancient Chinese carpets are recognised by many free spaces among the figures depicting dragons (antique Chinese religious symbol), snakes, butterflies and flowers or others figures of Taoistic and Buddhist origins. These Motifs often evoke the decoration of porcelain and silks.

Generally, yarns used to warp old carpets are very thin and together with the rough fleece cause big knots and, therefore, thick but, anyway, soft carpets.

Modern carpets instead shows different styles such as flowers and Persian motifs.

The latest carpets are knotted using machine-made wool yarn. The yarn is coloured with a type of chrome paint that is resistant to the sun exposition and to the cleansing.

Most of the new carpets are thick and compact since is used a double warp knotting is the senneh way.

Now as then, the hues came from Chinese tradition, the same colours used for the porcelain. Blue in all of his shades; yellow, ivory up to golden tones.

One of the characteristic details of that type of carpet is the use of the well-known China Blue – a paint of vegetable origins – traditional in Chinese art.

Now as then, the hues came from Chinese tradition, the same colours used for the porcelain. Blue in all of his shades; yellow, ivory up to golden tones.

One of the characteristic details of that type of carpet is the use of the well-known China Blue – a paint of vegetable origins – traditional in Chinese art. These ancient Chinese carpets are hand-made with awful tender and bright wools coming from central region of the China’s capital.

Decorations, very airy, are made up by a round central medal and few others sign that fill up the remaining surface. Blue, with all its shades, is the traditional colour of this shimmering artefact. Nixia Carpet are produced in Central Asia by Hui population, an ethnic group of Muslim faith known also as Dugani and originated by the meeting between Muslim merchants and local Chinese populations. In their creations, they bring together both cultures in a great way.

Chinese carpet are difficult to restore for many reasons: one of them is that they have many free space (namely, are many parts of the carpet without decorations). 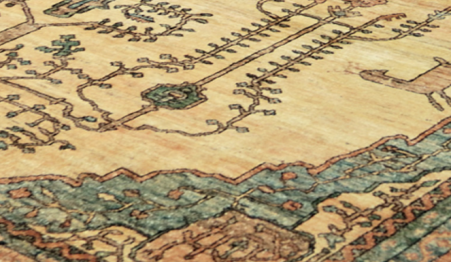 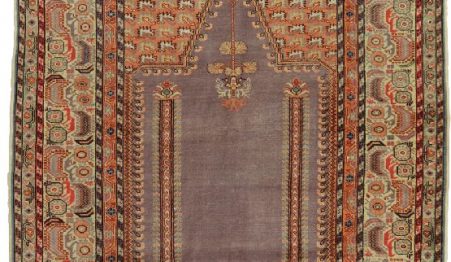 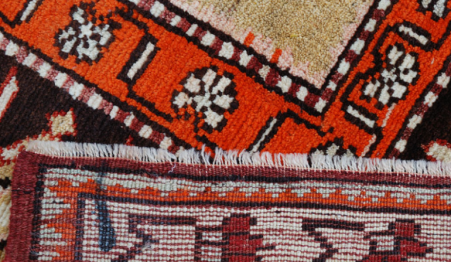